We do love a good read in the Gutter! Have a browse of some of our recently read titles below... 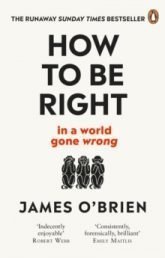 How To Be Right by James O’Brien

Reviewed by Bob, August 2019
Thank goodness for this book! In today’s crazy world of extreme performance politics, billionaire-controlled mass media, and Russian-bot social media feeds it’s fantastic to read a book that not only skewers the lies reported as truth, but also examines why people are so ready to believe the empty promises. I’ve never listened to James O’Brien’s LBC show (due to a phobia of listening to people say provably ill-informed things as though they’re facts) but the conversations recorded in this book show what happens when you make people think a little bit harder about the views they’re espousing and where they learned them. Incredibly readable, clever but funny, and a shining light in murky times – ‘How To Be Right’ is well worth reading!

The Dutch House by Ann Patchett

Reviewed by Bob, August 2019
I’ve been a fan of Ann Patchett’s writing since I read ‘The Magician’s Assistant’ way back when and was delighted to get the loan of her new novel ‘The Dutch House’ earlier this month. The story of Danny and Maeve, siblings left effectively orphaned after their mother leaves them and their father dies of a heart attack, ‘The Dutch House’ is a beautifully crafted novel about the hold that the past places on us and how damaging that can be. But it’s also a novel about love and forgiveness, about trust and family, and about how money can’t buy us happiness. It’s one of those books that I couldn’t bear to be dragged away from and haunted my thoughts until I’d finished it – it reminded me of Donna Tartt’s ‘The Goldfinch’ and of early John Irving novels – funny yet emotionally astute and truthful. I adored ‘The Dutch House’ and I’d urge you to read it!

Reviewed by Bob
On a ghost estate north of Dublin, a family are found murdered in their home. Scorcher Kennedy, famed for his dedication at solving crimes, and new sidekick Richie head up the investigation as they slowly uncover the secrets behind the deaths. I’ve always enjoyed Tana French’s dark psychological novels and ‘Broken Harbour’ is simply stunning. Much is written about the crime genre’s ability to tackle contemporary issues and French’s study of the property boom and its painful legacy is explored in a knowing and compassionate way. Mental illness and difficult family relationships are also core to the book but held together strongly by a clever plot and suspense. The novel is long and exhausting at times, despite taking place over a short space of time, but it’s difficult to see what could have been left out. There’s a couple of plot elements which are cleverly tied up but don’t quite satisfy, but as an example of great police procedure and suspense writing this excels, and also demonstrates once again that Irish crime writing is a genre at the top of its game.

Reviewed by Bob
This is the first Kurt Wallender novel from Henning Mankell. I’d been recommended them by various people in the shop but I do like to start at the beginning of a crime series so it was a while before I got to this. It took me a little while to get into it – I often find that with translated fiction, it’s the slightly unusual turn of phrase and the way that different languages structure sentences – but once I got into it I loved it! These novels aren’t typical ‘whodunnit’ style crime novels – they follow police procedure as crimes are investigated but you aren’t supposed to uncover the killer from a large list of characters, the novels work because you get so involved with Wallender’s character; he’s immensely flawed but also good at heart and as you wince over his mistakes you also admire his tireless pursuit of justice. I’ll certainly be going back for more.

I Am Number Foyur by Pittacus Lore

Reviewed by Bob
What a load of rubbish. I’d heard mixed reviews of this series and was aware that it had also been made into film. I was intrigued by the authors (Pittacus Lore is a fictitious character who also appears in the novels) – the actual writers are James Frey, who became famous after his autobiography ‘A Million Little Pieces’ was discovered to be partially fictional, and Jobie Hughes. The two writers have recently parted ways after disagreeing on the way the books were progressing and it is now unclear who will write the remaining four books in the series. This first book is fast-paced and there’s tense moments but the plot revolving around beings with superpowers seeking sanctuary on Earth after their own planet is destroyed feels hackneyed and derivative. There’s a fairly blatant eco-message about looking after your natural resources but I soon lost interest with the standard teen-superpower-first love-aliens plot. I certainly won’t be going back for more.

Dare Me by Megan Abbott

Reviewed by Bob
An adult thriller based on a teenage cheerleading team? I wasn’t sure about this at the start but ended up thoroughly enjoying this cleverly written and interesting novel. Megan Abbott is wonderful at creating strong multi-faceted teenage characters and her research into how hard cheerleaders train to pull off seemingly easy tricks is astounding to read. There’s something not wholly believable about ‘new coach French’ and the plot feels somewhat convoluted but the novel’s strength is its portrayal of cheerleaders and the pain they go through to achieve their ambitions. (Possibly not an ideal read for parents of teenage girls though – it can be very worrying at points!).

Reviewed by Bob
Set in a dystopian future where former child terrorists have their memories erased and start again ‘clean’ with a new family but under an oppressive government regime, this novel for teenagers is a well-crafted and intelligent exploration of how power can corrupt and why people in authority don’t always tell the truth. Pitched mainly at teenage girls, the novel also has a standard love interest and rebellious lead character but it is the political environment and depiction of government that makes this novel such an interesting read. It also raises intriguing ideas on the rehabilitation of young offenders and, like Orwell’s 1984, the difficulty of knowing who to believe. The only disappointing aspect was that there is no resolution at the end of the book, it’s the beginning of a series but I expected at least some of the plotlines to be wrapped up in this volume. 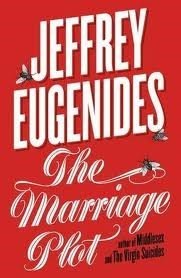 The Marriage Plot by Jeffrey Eugenides

Reviewed by Bob
I haven’t read ‘The Virgin Suicides’ (but I did enjoy the film) and I absolutely loved ‘Middlesex’ so I was delighted to receive an advance copy of ‘The Marriage Plot’ from HarperCollins’ new Independent Thinking initiative which recognises the role independent bookshops can play in recommending interesting books to customers that may be overlooked by the big chain bookshops.

‘The Marriage Plot’ is a dense yet totally compulsive novel that centres on the beautiful and romantic Madeleine Hanna and the two men that are in love with her: Leonard Bankhead, a manic-depressive biologist and Mitchell Grammaticus, a young man in search of spiritual enlightenment and aiming to ‘do the right thing’. The novel is a modern take on a traditional love story (Madeleine studies and writes an academic essay on female writers Jane Austen and the Brontes) but manages to encompass so much more. As with ‘Middlesex’, a simple plot structure is used to draw in all kinds of other ruminations, in ‘The Marriage Plot’ Eugenides examines the nature of love, relationships, mental illness, spirituality and biology. This completely enthralling novel is one of the best books I’ve read in a long time and manages to be both entertaining and revelatory. 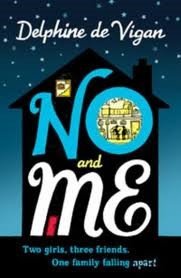 No and Me by Delphine De Vigan

Reviewed by Bob
This fiction/young adult crossover novel was recommended to me a couple of years ago but I had never got around to reading it, then I was pottering around the local library and it jumped off the shelf at me so I decided it was time to slot it into my busy reading schedule.

‘No and Me’ is the story of Lou, an academically gifted but insecure thirteen year-old girl, and a seventeen year-old homeless girl, Nolwenn or ‘No’, that she befriends as part of a school project. Both girls are coping with a number of issues; Lou’s mother is suffering from serious depression after the death of Lou’s younger sister in infancy and ‘No’ comes from troubled past that has resulted in her sleeping on the streets.
The novel is translated from French and is set in Paris.

This is an intelligent and thoughtful read. The author refuses to offer simple solutions to either girls’ problems and there is definitely no ‘happy ever after’ ending. At times the book feels a bit slow and plodding and the prose can be a bit clunky at times, something I often find in translated novels where a sentence in the original language would have read perfectly it seems awkward once translated. However I also enjoyed the book immensely and feel it offers a lot more in terms of ideas and social commentary than many books written for the young adult market.